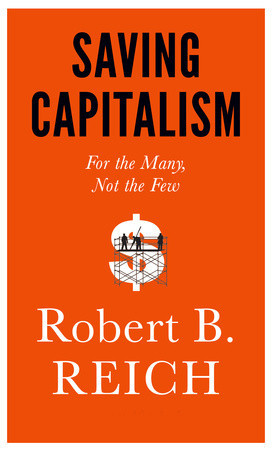 In this readable and fascinating book, Robert Reich shows us the result of some crucial changes that occurred in the 1980s and how they’ve affected our entire country, resulting in a tangled nest of problems for everyone but the richest people. He can show you both the details and the inconnected big picture, leaving you well educated on both history and next steps.

Remember the TV show “The Honeymooners”?  Well, maybe you don’t, it came out in the early 1950s. It showed two men — a bus driver and a plumber — both recently married and able to financially support their wives on just one working class income. We have come a long way from that reality. Now many couples are caught needing two incomes just to get by. Largely, this is the domino effect of a shift in the 80s to where the Corporation’s main priority is to benefit its stockholders. Since then, everything has gone downhill for majority of Americans. Reich explains how this happened and what it has meant for us.

In the past few decades, I’ve seen it first hand: jobs got outsourced and real wages tanked. Many people must work multiple jobs to get by. Young people are drowning in student debt. Older people are going bankrupt because they can’t pay medical bills. Almost as if it were by design, struggling people no longer have time to join organizations that hold political clout. Unions have been weakened, banks have been deregulated and many laws and policies, including those about arbitration and patents, have been shifted to benefit corporate interests to the detriment of the populace.

Reich paints a picture of the world we live in in stark terms: people can no longer afford to buy the things that are made here and our jobs are going away, because today’s company has managed to “trim the fat” of “extra” employees, getting by with significantly fewer workers than in the past. It may look good on a balance sheet, but for who? Those few people who are busy playing the baseball trading card game with the stock market.

“Stocks are more like a vast collection of baseball cards, repeatedly traded. Apple raised $97 million in its initial public offering in 1980. SInce then, those shares have circulated among investors who have bid up their price, but the added value has not gone to Apple; it has gone to investors lucky enough to buy them low and sell them high.” (p. 199)

That quote alone is worth the price of the book to me. Here’s another good one:

In 2014, the “six Walmart heirs together had more wealth that the bottom 42 percent of Americans combined.”  (p. 213) Think about this the next time you see that commercial about how Walmart employees can’t earn enough to get by. 42 percent of Americans is 132,000,000 people. Think of that the next time you pass a homeless person in the street, or wonder why so many people are lined up at the food bank.

Reich points out that the way things have been going are simply not sustainable, and speaks of prior historical eras that were similar to our time (think Depression > New Deal) and how the pendulum eventually swung the other way, as it must do now, or capitalism will be destroyed. You simply can’t have a capitalistic free market when the consumers are too poor to play the game.

The end of the book is optimistic. One idea he sets forth (one that has a precedent in both conservative economist F. A. Hayek and the 18th century’s Thomas Paine) is the “basic minimum income.” Once a person reaches adult age, he or she could get a basic monthly income. This would reduce their need for private employers, and for getting a demeaning form of government assistence such as welfare. They could work of course, and many would, finding meaning in following their calling, rather than just being a wage slave in order to prevent starvation or homelessness. How would he pay for it? Read the book to find out.